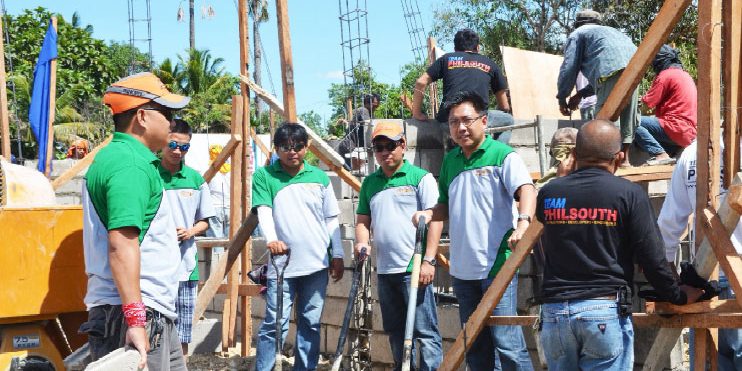 As the saying goes, “It is better to give than to receive.” This stands true for PhilSouthProperties & Development Corporation as they volunteered in the Bayani Challenge, a project of GawadKalinga, in Mabinay, Negros Oriental last March 23-24.
“I believe Bayani Challenge is a volunteerism event that intends to create friendships despitepolitical party differences, all of us working for a common good,” says Mabinay Mayor Ernie JangoUy.

According to Uy, the LGU of Mabinay has donated a 6-hectare lot for the GawadKalinga site. PhilSouth Properties and Development Corp. also generously pledged for two of 35 two-storey-row houses that were constructed for the homeless victims if typhoon Pablo in December 2012.

The Engineering and Marketing Department staff composed of 30 members of PhilSouthProperties and Development Corp. offered their services in building one of the many houses of the Bayani Challenge. The team of volunteers accepted the challenge in making the foundation and the house assigned to their team, and helped form the other houses, as well.

Inspired by this year’s theme “IsangBayani, IsangBayanihan,” and in-spite of the intense heat from the sun, the volunteers were motivated to do all kinds of responsibilities and engaged in varied-nation building activities.

It was a fulfilling day for Team PHILSOUTH having been able to accomplish such task while bringing the Bayanihan idea. The emotional, mental and physical qualities necessary to perform the task was all worth it. Come another Bayanihan Challenge, Team PHILSOUTH will be there… Bring IT! (by Melissa Pal) source: negros chronicle