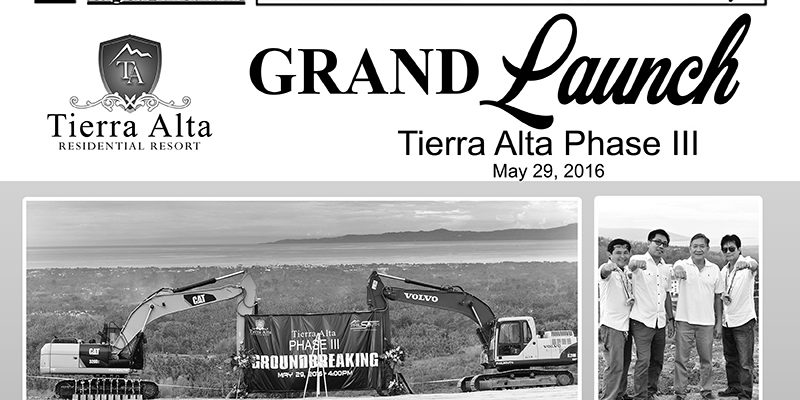 Negros Chronicle Press Release, June 12, 2016
By Cecile M. Genove
A slight delay can turn into a great blessing as manifested through a sound decision. This was proven true recently by the team of Philsouth Properties and Development Corporation, the premier developer in the region, as it launched the third phase of Tierra Alta Residential Resort in barangay Palinpinon, Valencia, Negros Oriental.
The year-long delay turned out for the better as today, this latest addition has become a massive 18-hectare single phase development, thus, making it the biggest single residential development in Negros Oriental. “Combining all the three phases, Tierra Alta is now more than 32 hectares in size in just a span of six years since we initially opened to the public. Our goal now is to reach 50 hectares in the fourth phase,” informed Louie Tijing, president and chief executive officer of Philsouth Properties and Development Corporation.

Primarily meant to benefit the people of Dumaguete and Negros Oriental, the facilities and amenities have now expanded to include a clubhouse, an infinity swimming pool, a boulevard, wide roads and open spaces, shady parks, and picnic areas.

The launch on May 29, that also served as a groundbreaking of the third phase, likewise marked the start of the construction of a 300,000-liter capacity water reservoir solely for the exclusive use of Tierra Alta residents. According to Tijing, a visionary in the area of property development, the construction is now ongoing and is located in the forthcoming Phase 4 site. Tijing continued, “We have started, too, with the drilling for a production deep well as a back-up facility in the dry season. It is located just below the ridge and is within the area of the parks and playground.” He added that Philsouth intends to hit water at 400 feet by the end of August this year in order to address the mounting needs of the increasing number of Tierra Alta homeowners.

Reelectionist Valencia Mayor Edgar Teves, who was present in the launch, has committed to provide a direct, dedicated water line to the water reservoir through the efforts of the local government unit. In his message, Mayor Teves lauded the determination and perseverance of Tijing, his partners, and the Philsouth team in putting Valencia and the province in the tourism roadmap, thereby, living up to its reputation as one of the 10 best retirement places in the world, according to a recent survey of an internationally acclaimed tourism and travel organization.

Moreover, back to back with the launch and groundbreaking was the inauguration of the first roll forming roofing plant to operate in Negros Oriental, the DN-Philsouth Steel Corporation, located in Palinpinon, Valencia. A joint venture between Philsouth and DN Steel Group of Companies, its primary mission is to bring the plant to the province in order to supply locally manufactured steel products with a quality at par with international standards, but “at a fraction of the price.”

“About 20 years ago, as co-landowners of this site, our dream of developing this place remained just a dream because we did not have the capacity and competence, until this dream was finally turned into a reality six years ago when we offered this project to Philsouth,” intoned Atty. Nilo Ruperto, who recalled the time when he welcomed guests in the groundbreaking of the clubhouse as well as the launch of the second phase in August 2010. Sharing his recollection were his co-landowners, who were likewise present, Antonio Sy Jr. and Djong Calumpong representing the heirs of Edong Calumpong. Atty. Ruperto acknowledged the support of barangay Palinpinon through its barangay officials as well as the assistance of Third District Rep. Pryde Henry Teves (incoming Bayawan City Mayor) who was instrumental in allotting funds for the improvement of the water system in Palinpinon, including Tierra Alta.

For his part, Edward Du, president of the Negros Oriental Chamber of Commerce and Industry (NOCCI), lauded the efforts of everyone who worked hard for the realization of the project, underscoring the significant partnership between government and the private sector.

Also present in the occasion were client-buyers, Tierra Alta homeowners, local government officials of Valencia, banking institutions, the Philsouth team, families of the landowner-partners, and members of the local media. Providing entertainment during the launch were Mano Saldivar and Helian Roferos, which was followed by a back-to-back concert later in the evening with Freestyle and Side A bands.

“This lovely environment and breathtaking, panoramic view, including the amenities and privileges of being a Tierra Alta lot owner, are comparable – if not more than comparable – to the price that you pay. More than anything else, there is no price tag for the finest ambience,” Tijing concluded.