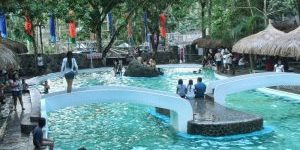 The local government unit of Valencia, Negros Oriental entered recently into a public-private partnership scheme with Philsouth Properties and Development Corporation, the pioneer real estate developer in Negros Oriental, for the totaldevelopment of the former Tejeros Lagoon located in Barangay Apolong, Valencia.

In the signing of the Memorandum of Agreement between Mayor Enrique Gonzalez representing the LGU of Valencia and LouieTijing, president of Philsouth Properties and Development Corporation, the project involves the financing, design, and development of the existing lagoon, which was unfortunately damaged by super typhoon Sendong on Dec. 17, 2011. Since then, two years after, the place has been left idle and non-operational.

The project envisions to transform Tejeros — which will henceforth be known as Banica Valley Swimming Pool Lagoon — into an exciting, adventure-laden, and one-of-a-kind experience for people from all walks of life. This holds true to its origin of having the coolest natural body of water and, at that time, the only resort-type destination for enjoyable family and group outings in the province.

In keeping with the increasing demand of excellent service and utmost convenience for those who need to have a quick get-away from the hustle and bustle of daily living, cottages, picnic areas, and various concessionaires for food and drinks will be made available at the site. Other features will include a mini zipline, wall climbing facilities, accommodation for overnight or longer stay, as well as other amenities that will focus on eco-tourism.

Moreover, according to Mayor Gonzalez, to maximize the utilization of the swimming pool lagoon not only for the people of Valencia, but of the entire province and other neighboring places for everyone’s total enjoyment, the entrance fees will be very competitive and affordable at P30 each for adults and P20 each for children.

“If you are a resident of Valencia, we are happy to announce that we shall be giving special rates of P10 only for adults and P5 for children upon presentation of valid identification cards to indicate that you are residents of Valencia. This is one way by which your local government unit can reciprocate the support you have given to our municipality which has, over the years, grown into a bustling economy courtesy of the confidence given to us by investors and entrepreneurs,” informs Mayor Gonzalez.
The project likewise intends to capitalize on the human resourcesof the municipality. According to Tijing, Valencianons are generally known for their perseverance and penchant for hard work, industry, and discipline. “During the development stage of the project, we will be giving priority to local residents. Not only will we be able to augment the income of the residents, but they will in turn be able to help us in terms of their familiarity of the terrain,” explains Tijing, adding that “because the workers are local residents themselves, the attachment to the place is great and their enthusiasm is spurred to do their work well.”

It will be recalled that the Tejeros Lagoon was part and parcel of the lives of Valencianons and Duma-guetenos for many years, who have made it a habit to troop to Tejeros during holidays, celebrations, and even for mere getting together. “It is not too late to re-educate our people and revive their interest and love for nature and the outdoors. Perhaps, instead of relaxing in malls, we can enjoy the benefits of clean, fresh air and the soothing cool waters in the lagoon with family and friends,” Tijing suggests.

The municipal council of Valencia has adapted and passed Sanggunian Bayan Resolution No. 30 series of 2013 authorizing Mayor Gonzalez to enter into such partnership with Philsouth Properties and Development Corporation to manage and operate the project for 25 years. Valencia is the site of the Energy Development Corporation/Green Core and Tierra Alta Residential Resortboth in Palinpinon, among other major ventures. The latter is one of the numerous prime projects of Philsouth Properties and Development Corporation, including Northville Subdivision in Sibulan, Negros Oriental whose new facilities were launched last April 25 with no less than the Home Development Mutual Fund/Pag-Ibig vice-president, Vicky De la Pena, as guest of honor. <source: negros chronicle>

Home Buying in Dumaguete City and Negros Made Easy
May 22, 2014

Congratulations to PHILSOUTH BUILDERS for achieving ISO 9001:2008 Certification
May 16, 2014